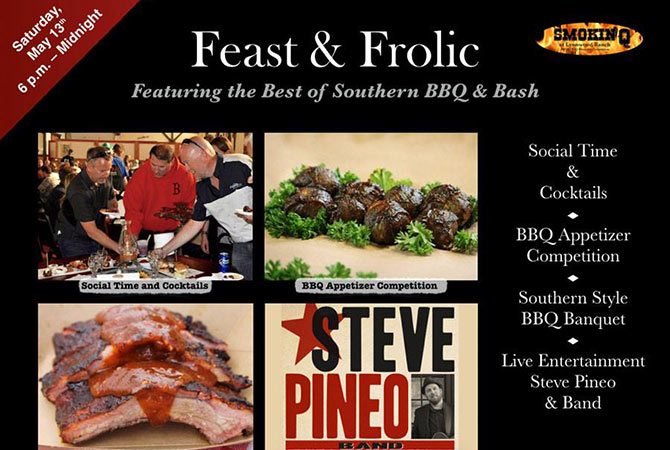 Lynnwood Ranch’s third annual KCBS sanctioned BBQ competition and BBQ Feast. The KCBS BBQ Competition “Smokin Q” was started in 2015 after a friend, Bernie Kenny of BBQ on the Bow paid a visit to Gus & Wendy LeDuc. Bernie spoke of the need for more BBQ competitions in Alberta and that Lynnwood Ranch would be the perfect location. They set a date, May 3rd. 2015 and got to work. There wasn’t much time since there was only four months to make it happen. It came together with the help of many great people in the BBQ world: Bernie Kenny, the good folks at BBQ on the Bow, Mike Mulloy, Jason Hjelsvold, and the sponsors. We had 23 BBQ teams register, more than hoped for in the inaugural year. To complete the event they hosted a BBQ Bash “Feast & Frolic”. With the help of the BBQ teams an amazing BBQ feast was provided to the almost 300 people attending. So…..let’s do it again !  Dates this year – May 13 & 14, 2017

The Barbeque on the Bow Society and The Heritage Centre by Mountain View Events Ltd.…

To enhance the quality of life in Calgary through a free, fun, family oriented annual culinary festival featuring one of Canada’s oldest sanctioned BBQ competition.

Find Us On Facebook
The History
The BBQ on the Bow Society, established in 1993, is a registered not-for-profit organization. The Society is committed to enhancing the quality of life in Calgary socially, culturally and economically and hosts the "Alberta Championships" for Kansas City BBQ (southern style).